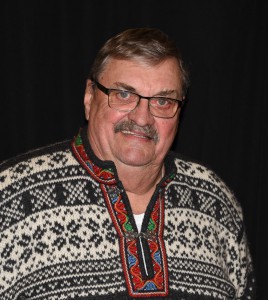 Jim is a member of Snorre Lodge in Thief River Falls, joining in 2006. He served as President from 2008 – 2012. While President, Snorre Lodge started Norwegian Heritage Week in Thief River Falls which is still going strong at present. They also started Norwegian Day at the Fair at the Pennington County Fair, and Jim has served as chairman of that event. Jim and his wife Jan have been involved in the “Adopt a School Program” for the last ten years in Newfolden, Mn. They inform the 5th graders each year about Norway, and the traditions the immigrants brought to America. Jim currently is Vice President of Snorre Lodge in charge of membership, and will serve on the membership dinner committee again this year.

Jim and Jan are both retired. Jim retired as a principal of a secondary school in 1990 after teaching and was principal for 27 years, retired from adjunct teaching at Northland Community and Technical College in 2005 after 14 years, serving a full year as Academic Dean twice. Jan retired in 2006 after serving over 30 years at NCTC as the assistant librarian.

Jim is very active in the community working with Sons of Norway, Lions, TRF Concert Association, Community Fund, and other volunteer activities. Jim has been named Volunteer of the Year by the TRF Chamber of Commerce, Outstanding Senior Citizen for Pennington Co., and along with his wife Jan, was named NW MN Arts Advocates if the Year. They say, “Keeping busy keeps us young.” Jim and Jan like to travel, and when they are not busy on a project, or spending time at their cabin at Buffalo Point, Manitoba, they are traveling the world somewhere.

Jim can be contacted at jimstrandlie@mncable.net

(Click here to watch a Video about Tubfrim from District 5)

Nyhetsbrev:  Check out the most recent newsletter

Find a lodge near you